Summer at its best

Seen my latest post with new pictures already dates from some while ago, I feel I owe you something. So I decided to update you with my most recent shots of the Banded Demoiselle together with a little look behind the scenes.

You might know I needed some time to adapt again to the Netherlands and its nature after my holiday to Costa Rica earlier this year. Costa Rica, land of colors and abundance of so many different kind of animals and plants. Photographic challenges everywhere you look. Back here it seemed I had to look so much harder to notice any photographic subjects. Now, a few months later you don’t hear me complaining anymore. We might not have this abundance in nature, but what we have is great!

Think for example about the Banded Demoiselle. Such a beautiful damselfly with colored wings. The male has a dark blue/black band across the central portion of his wings while his body colour is metallic blue/green. The female has iridescent pale green wings and her body is green with a bronze tip. Their flight is butterfly-like and it is specially the flight of the male, for example in an attempt to conquer a female, that fascinates me.

My photographic journey starts in the morning when the damselflies are still resting and sleeping. This is the perfect time to approach them at close distance because they won’t fly away. 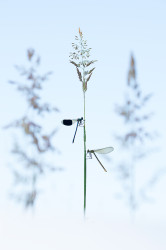 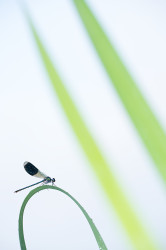 When temperature rises the damselflies become more and more active. Depending on the weather they act differently. When it’s sunny and warm they are extremely active with their mating behavior. The males are showing territorial behavior and are constantly on the lookout for females. When it’s cloudy there is much less activity. Photographing this activity is a new challenge for me. Obviously it means I temporarily have to forget about my beloved macro lens and I have to switch to the télé lenses. Also I must be very careful with my equipment when I go into the water to take pictures from just above the water level. Using a float turned out to be very helpful. 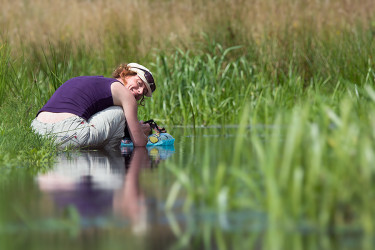 This is the part where I have to warn you: Do not try this at home! Meaning: put on your waders before you go into the water! What happened? During a similar action my boyfriend was harassed by larvae of the leaf worm. Apparently they can penetrate into the skin without being noticed ore felt. But when they die the body shows an allergic reaction in the form of severe itching lumps, lasting for more than a week. I suppose I was very lucky not being bitten during this shoot… 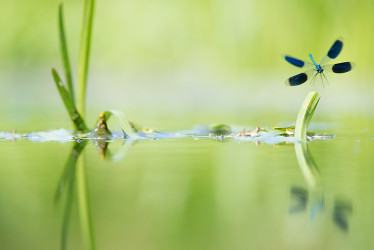 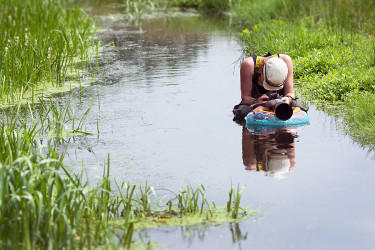 Of course now with my waders on… Not looking very feminine, but hey who cares… 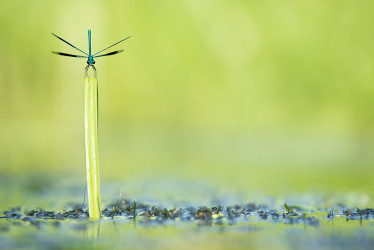 And then there are the shoots from the shore. Trying to capture the flight of the beautiful males. 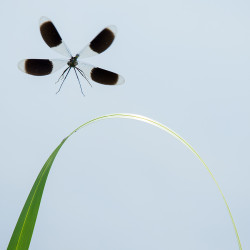 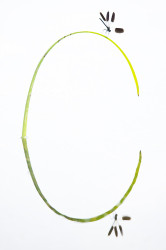 It seems the Banded Demoiselles have now almost all disappeared (at least at my spotting place). I can’t believe how fast they have gone. Reminds me summer is almost over… But no worries, there are lots of other subjects to find… Stay tuned!