I just can’t believe summer is already coming to its end now. Like I said before, this summer was a crazy one. We endured storms with fallen trees, showers with flooded cellars and even a real heat wave with people getting unwell. These extreme weather conditions have also affected me and my photography. Needless to say, when it’s windy it’s no time for macro photos. The same when it’s rainy of course. And when temperature rises above say 26 degrees, my mind and body involuntary go into some sort of a strike in which it’s impossible to even think of photography. And this while summer is one of my favorite photo seasons with its flowers and insects. I can assure you it was rather frustrating from time to time.

But… no worries, pictures have been taken. Although most of them are not of my expected subjects, I am still satisfied with the results. One of my themes from this summer that I would like to share with you is the Six-spotted Burnet, a diurnal moth. I have no idea how it is possible, but somehow I managed to create a huge delay in my photo editing. This Six-spot Burnet which I shot in June is in fact the only subject that I have now fully edited. And yep I know it’s already September. But hey… better something than nothing.

So it was June and Edwin and I where shooting poppies in a new area. Well… shooting poppies sounds better than it was. It seemed this year what not the best poppy year and this day was way after the top of the blooming period. Moreover there was more wind than there were poppies if you know what I mean. Still we wanted to give it a try. While I was standing there with my tripod and my tele lens in the field, mostly waiting for the wind to lay down, this unknown man approached me. Seen the fact that the poppies were rather disappointing I was even in for a chat this time. This man turned out to be a very friendly nature lover and photographer. He knew the area very well and often returned to enjoy nature and to take photos. Proudly he showed me his recent results on his camera. And this is where it got really interesting. He showed me among others the Six-spot Burnet which turned out to be shot just some 100 meters further away from the poppy field we where just now standing in. This you only have to say to me once! After a short chat the man continued his path, probably not aware how happy I was after receiving his information. Edwin and I tried for a short time to make something out of the poppies, but my mind already was fully with the Six-spot Burnet. Never before I have had good opportunities to shoot this butterfly. How great would it be to discover this insect here! So off we went to the unknown field with the Six-spot Burnet. And yep, the man was totally right, we found the Six-spot Burnet in large numbers. What a joy! We spent the rest of the afternoon with these beautiful butterflies and later on we have returned some more times. This little field was ideal not only because of the presence of the butterflies but also because there were hardly any people or photographers coming by. Seen the fact that the number of nature photographers is rapidly increasing, I am appreciating these quiet environments more and more. They make it possible for me to fully concentrate on my subject and to entirely enjoy nature. I hope to discover more of these areas! 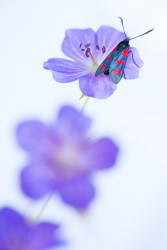 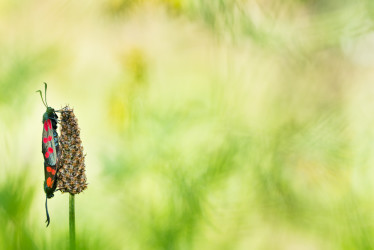 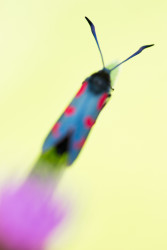 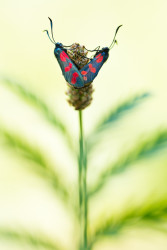 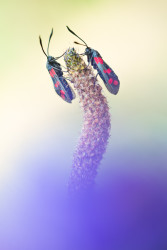 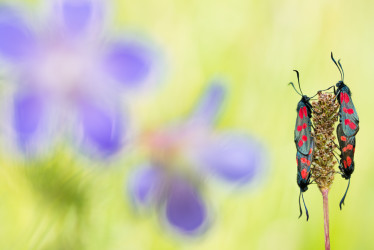 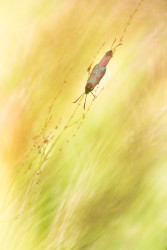 Posted in New pictures | Comments Off on Six-spot Burnet
error: Content is protected !!