Back into the fields…

In some ways it has been a weird winter for me. Meaning I have been very busy with my photography, but not as you might expect outside in the fields, but mainly indoors behind the pc and attending photo festivals. That’s the other side of the job I guess… How to get your pictures out there. For example I have been working like crazy to get finally this new website online.  Then  ofcourse there was my very first exposition in the Katholische Akademie in Cloppenburg, a magical moment if I may say so. And finally there was my first big national performance during the Macro PiXperience in Amsterdam.

And then… suddenly springtime was there. But more important: Finally I had my head clear to focus on its inviting macro subjects. So… off I went back into the fields again. And there I found myself on an early morning during sunrise between the Haircap moss… Now surely you would think I would be happy as a child and over the moon laying there in the middle of one of my favorite macro subjects. But.. unfortunately this was not the case, at least not in the very first few hours. The thing was, it was cold, so very cold. The only thing I really was thinking about was my very warm bed which now seemed so far away. But… persistence wins, at least in this case. After a while the increasingly warmth of the sun had a positive influence on my body, mind, and therefore also on my pictures. Finally… my macro lens was my friend again and it felt like coming home after a long time of absence. 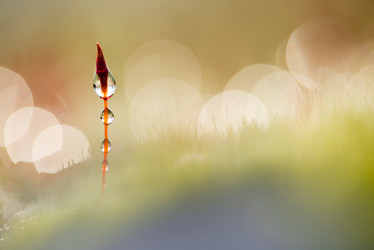