Summer at its end

After my adventures with the Banded demoiselles, fun was not over yet. We are so blessed over here in the Netherlands with the presence of the Banded darters. Together with the Banded demoiselles these are, in my opinion, the most beautiful dragonflies we have over here. It is a small species with a red colored body of the male and a more brown colored body of the female. Both sexes have a brown band across each wing. It is in particular these brown bands that make these dragonflies so special and recognizable.

I was eager to see the Banded darters again this year, after my first encounter with them last year. But I have to admit, I was surprised by the difficulty to find them in first instance. While I found them in the top of the vegetation last year, this year often they were found more close to the ground. As photogenic they eventually are, setting in the vegetation they can be really inconspicuous. Dewy mornings turned out to be the most successful. With their wings covered with dewdrops they are better traced and found.

On top of my wishing list there were the more atmospheric pictures with back light, with the Banded darter in its natural habitat and lit by the morning sun. This is not as easy as it sounds however. I had to visit the area many times, starting before sunrise of course, to finally witness some warm colored sunrises. I was happy! 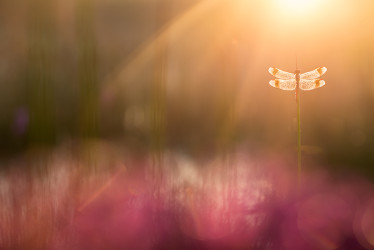 And yes, I had to try a shot with dew/rain drops. Seen so many times in other photographs, I wanted to take my own one for once. In this case, a spray bottle added some magical dewdrops as ingredients. 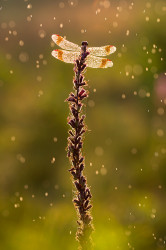 For me as a photographer, the actual moment of sunrise is both magical and stressful. The warm light is overwhelming and seen the fact it only last a few minutes, I have to act really fast. I have to know what I want to shoot. There is no time to doubt, because the magical light might be gone before I know it. In this case I chose to go for a more detailed picture of the beautiful and distinctive wings of the dragonfly. But even knowing this it still is hard working. With the sun as back light I set my focusing on manual and my exposure on aperture priority. Manual focusing because these lightening conditions are often too hard for the macro lens to handle. Aperture priority because the size of the aperture controls the size of the sun in this case. 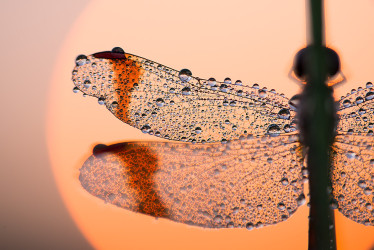 While somehow the Banded darters invite me to take back light pictures, I also wanted something else. No sun in front, but in the back this time. As I often practice this technique with flowers, I never used it with the Darters. Still, there is a first time for everything. So with the sun behind me and the Banded darter kept carefully in the shadow by using my own shade in combination with an umbrella, I took the next photograph. The background is lit by the sun and the painterly effect is caused by vegetation in front of the lens. 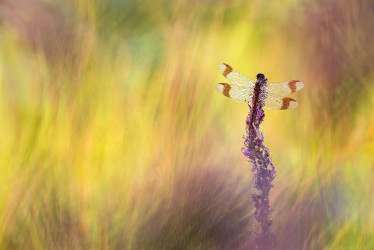 I love to play with sharpness versus unsharpness. It is so much fun to do. Macro at its best when only one tiny detail is sharp and leaves the rest of the picture in a kind of abstract form. I know it is a Banded darter, but in fact it doesn’t matter in this picture. 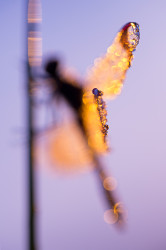 Now the Banded darters are gone. Also meaning summer has ended. I had so much fun shooting them, can’t wait to see them again next year. I’ll comfort myself with the last one, one of my favorites. 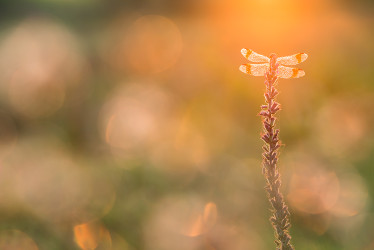